POSTAL 2: Share The Pain, Multiplayer Edition is the first official expansion for POSTAL 2.

Originally available as a download for original owners of POSTAL 2 on the RWS site, this expansion adds two new areas to the base game("Obligatory Sewer Complex" and "Tora Bora"), a new weapon ("Weapon of Mass Destruction"), Multiplayer, and a fully functional version of Unreal Editor 3.

The meat of the expansion is the new multiplayer mode. Based heavily on Unreal Tournament, there are four game modes:

Standard for multiplayer games. Can be set to most Frags in a given time or set amount of Frags to win.

Like the above except between teams (Red vs Blue).

Capture the flag except with sexy Postal Babes instead of flags.

POSTed is a modified version of the Unreal Engine 2 SDK (more commonly known as UnrealEd). This allowed for custom maps, characters, and game modes to be created by the user. Expansive, whole new campaigns can be created and coded from scratch.

As a way to advertise the then upcoming Postal Film by Uwe Boll, the Multiplayer component was released on ModDb as a standalone on May 20th, 2008 .

On January 21st 2012, a patch was released by RWS in conjunction with Resurrection Studios for the Share the Pain Multiplayer adding additional game modes, popular fan mutators, more characters, and various bug fixes.

This patch isn't fully compatible with the Steam re-release nor is it included as RWS consider it a "server side patch"[1]Fortunately, all features can be downloaded from a 1409X server allowing steam users all the benefits of the patch. 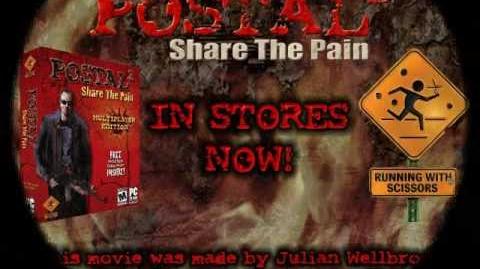 Postal 2 STP Multiplayer demo
Add a photo to this gallery

Retrieved from "https://postal.fandom.com/wiki/Share_The_Pain?oldid=18467"
Community content is available under CC-BY-SA unless otherwise noted.