Postal Wiki
Register
Don't have an account?
Sign In
Advertisement
in: A Week in Paradise Weapons, Items, Weapons,
and 3 more

Use this for a rockin' good time!

The Power-Infused Gary Autobiography is an item in POSTAL 2.

When activated, the Dude's weapon changes to Gary's head and there is a Gary head with "three" next to the Dude's health. The Dude's vision also changes to the hallucination filter. The effect ends when enemies destroy the Gary heads surrounding him. They can be destroyed if they are shot by the enemy or if they touch an enemy.

Primary fire launches a Gary head straight forward while secondary fire launches a homing head. The Dude does not lose any heads for firing them. The Gary head basically acts as a missile, primary fire exploding wherever it lands or touches before landing, and the homing head exploding either when it reaches its target, when it touches another living being which intercepts the head, or if the head simply cannot reach its target.

The player may have as many as 9 Gary heads orbiting him at any given time, which can be achieved by using 3 books one after the other.

This item can only be found in the Apocalypse Weekend section of POSTAL 2 Complete during Enhanced Mode. 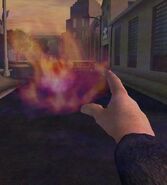 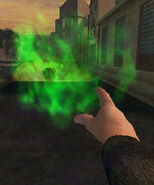 Inventory icon for the weapon.

Inventory icon for the item.

The book in action; notice the Gary heads everywhere.
Community content is available under CC-BY-SA unless otherwise noted.
Advertisement