Postal (Mobile) was a mobile phone game developed by Ministry of Fun, co-produced by Kei Tai Toys, and published by GlobalFun in 2009. It is considered a non-canon spin-off.

Following in the footsteps of POSTAL 2, the game's events are divided into days: Monday, Tuesday, and Wednesday

While minding his own business, the Postal Dude finds himself surrounded by armed thugs who steal his car. Unscathed, he finds that one of the thugs has dropped his gun. With this only clue, the Postal Dude asks around if anyone has seen his car.

Failing to find any information, the Postal Dude heads to an office building to file an insurance claim.

After that, the Dude looks to a friend of his to get a better gun to help him find his car.

Thinking about his troubles, the Postal Dude heads to a local supermarket to get some beer.

With beer in hand, the Postal Dude returns home to find it has been burnt down by thugs. After hunting down some video from his neighbor Tim, he finds the two guys who did it only to find out his house was "the wrong house". Pissed, the Postal Dude kill one of the thugs, after which the other one mentions he works for the Mayor and is very important. Not caring about this, the Postal Dude kills the other thug only to learn from from his dying breath that the Mayor may have his car.

After dealing with some corrupt cops and gangsters, the Postal Dude heads to City hall to find it is surrounded by SWAT. Unable to get in, the Postal Dude thinks up a plan involving gas cylinders.

With the gas cylinders in hand, the Postal Dude head to City Hall, planting them around the building. After dealing with some security, the Postal Dude sets them off, putting the building on fire. He then goes inside said burning building, and (after blocking off one of the two emergency exits) hunts down the mayor who throws a hissy fit over getting stopped by a "moron". The mayor runs only to be killed by a random explosion. The Postal Dude checks the corpse to find some keys. He checks the Mayor's desk to find copious evidence to his corruption.

The Postal Dude escapes the burning building with the evidence only to find it surrounded by cops. Eluding the cops, the Postal Dude gets a tip from a bum who tells him about a journalist named Goldie who can give him his fifteen minutes of fame. He finds Goldie and his news van who a being threatened by a corrupt cop. After dealing with the cop, the Postal Dude tells Goldie that he has the Mayor's documents and is ready to give him an exclusive interview. The cameras roll then the Postal Dude tells the audience that he is missing his car with a reward guaranteed.

The game plays in a top down fashion reminiscent earlier Grand Theft Auto titles. There are no health packs as the Postal Dude has regenerating health. Gunplay revolves around an lockon system where the Postal Dude will auto lock on enemies in front of him.

The game takes place over three days (Monday, Tuesday, and Wednesday) though these days are comprised of levels dealing with the Postal Dude as he searches for his stolen car. With each beaten level, new weapons and perks are unlocked.

In addition there is a survival mode with three maps where the player can use any of the weapons and perks unlocked in story mode. As its name implies, you fight enemies until you die for a high score.

Along with this, there is a perk system with new perks being unlocked with each level beaten. The Postal Dude can have two perks activated at a time. 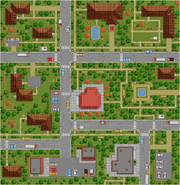 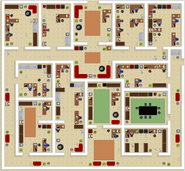 Second Map
Add a photo to this gallery

Retrieved from "https://postal.fandom.com/wiki/Postal_(Mobile)?oldid=16230"
Community content is available under CC-BY-SA unless otherwise noted.