PU Games is a location in Paradise Lost. Formerly the Bank, it is now inhabited by the Game Devs, still with the intent of exploiting the wallets of the populace. The company's notable departments include:

One of the errands given to the Postal Dude by Papa Desi on Tuesday is to trash their offices as they act as the VD Clan's opposition in the game development field.

Exterior of the PU Games.

Interior of the PU Games. 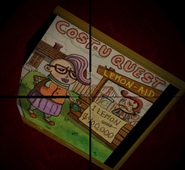 The PU Games Boss at his desk, with "Loot 'n' Stash" visible on his monitor.
Add a photo to this gallery
Retrieved from "https://postal.fandom.com/wiki/PU_Games?oldid=15772"
Community content is available under CC-BY-SA unless otherwise noted.