There are sixteen levels in the base game of POSTAL (seventeen if the Elementary School is counted), four additional levels (EZ Mart, Shanty Town, Earthquake, and The Resort) were added in the Special Delivery add-on, two more levels (Tokyo and Osaka) in Super POSTAL, and another two additional levels (The Carnival and The End) created specifically for Redux.

Each has a quote from the Postal Dude, with the entries for Tokyo and Osaka done in haiku form.

In addition to the quotes, the original POSTAL manual had a set of diary entries which the Postal Dude refers to as his "War Journal" after the fourth level. These entries would be re-used in POSTAL Redux for the game's hard mode along with new entries for the add-on and Redux exclusive levels. Unlike the previous quotes, there are no dates on the war journals.

10/18/1997 Furious fireflies materialize against the cavern wall and sunder the earth into dust. Come, little insects, and see the web WE'VE woven!

10/19/1997 I will don the eviscerated organs of my enemies as party hats, wear their shredded entrails as neckties, and oh, how I shall dance!

10/19/1997 Human trash spills from its containers as death rains down upon them, sweeping the streets in a cleansing cloudburst of blood...

10/20/1997 Blood splinters everywhere. Like a river, flowing around me, pulling me in its wake. Paradise! Prepare for...deconstruction!

10/20/1997 Black leather smoke coils up my nostrils tingling with death's surprise. Human remnants cling to my clothing like bloody briars as I continue to wade, hip deep in flesh, bone, and viscera. Bad neighborhood coming up!

10/21/1997 I am the celestial gardener, policing the planet of the stink weeds and poisons which leak out even through the cracks in the cold asphalt sidewalks of the City of Sin!

10/21/17 Keep your head, hands, arms, legs, and feet inside the ride at all times. You're bound to lose MORE today than just a few limbs!

10/21/1997 Feast upon the frozen images of molten massacre as the machineries of death grind relentlessly, mindlessly on...

10/22/1997 From the halls of the Vatican to the Runways of Truth, we are there. At the place called Climax, and the time called NOW. When it's done, let the gods sort it out! 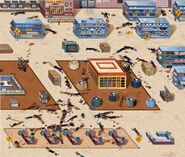 10/23/1997 The hive has been cleansed. The source of the corruption has been corked, laid in a body bag and dragged to the outskirts of existence...

10/23/17 The hive has been cleansed. The source of the corruption has been corked, laid in a body bag and dragged to the outskirts of existence...

They've got you outnumbered, but that's about it. (Gauntlet level) 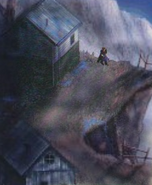 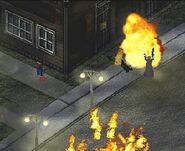 Another cut level
Add a photo to this gallery

Retrieved from "https://postal.fandom.com/wiki/Levels_in_POSTAL?oldid=15877"
Community content is available under CC-BY-SA unless otherwise noted.